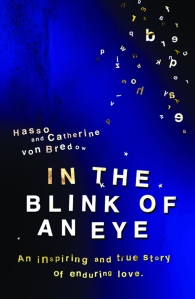 This uplifting memoir describes the struggles of a 42-year-old, family-orientated City banker, whose life is brought to a standstill after he suffers a major stroke.

He becomes a prisoner in his own body; paralysed, unable to speak or eat, but retains his ability to see and hear. Medically, this is called locked-in syndrome.

Yet, his lack of self-pity and his determination to improve his situation are strikingly evident as he combines his ability to open and close his eyes, with the only other movement he regained in his body, to record his account of his stroke.

A draining, painfully slow process; he recorded each and every letter in the book through a temperamental thumb movement, using a specially designed, ultra sensitive computer system with an on-screen talking keyboard. He did this from his wheelchair during the last few years of his life.

He strung letters into sentences with the help of his wife and full-time carer Catherine.

Even though he had lost his voice, he managed to find the strength to tell his story and communicate with the world. He passed away in 2004, four years after enduring his stroke, and this memoir was published in 2009 by Catherine.

At first she merely distributed 200 copies to friends, family and doctors who had been involved in Hasso’s care, but then she began receiving letters from people who had been moved by Hasso’s words and arranged for mass publication.

This is an inspiring, true story which takes you on an emotional rollercoaster. The narrative switches from Hasso to his wife, as their accounts of his life are interspersed between chapters.

Soon after my grandad suffered his stroke, I stumbled upon this book. It has been one of my many companions throughout the journey of his illness. Sadly though, my grandad took his last breath on Monday.

I can’t explain the amount of support and help I’ve had from friends and family, who have helped me get through this week. But I also can’t believe the strength, insight and optimism that this book filled in me.

It supplemented the information I received from the various leaflets on stroke care I found in the hospital. It gave me someone to identify with; Hasso’s wife speaks of her struggle and her difficulty coming to terms with her husband’s illness, as well as the way it has affected her.

The book explained about the day-to-day life of a stroke patient, what happens in speech therapy sessions, what occupational therapists try to do with patients, and the different equipment used to try to assist patients. For example the air mattresses, which Hasso described as uncomfortable; something my grandad also complained of.

It helps you understand a stroke patient’s pain; whether they are your relative, friend or neighbour.

Courage, love and determination are persistent themes in this book and it becomes difficult to put down.

In the Blink of an Eye by Hasso and Catherine von Bredow is published by Orion.

2 thoughts on “BOOK about locked-in syndrome: In the blink of an eye, by Hasso and Catherine Von Bredow”