Combine a farting Princess, a biscuit with attitude, a grumpy yet lovable Scottish Ogre and an evil 3ft tall Prince. Add to this; amazingly intricate costumes, lots of farting, hilarious jokes and uplifting, high-energy songs.

You’re left with an unbelievably amazing feel-good comedy musical, which brings our favourite Shrek characters to life and makes you love them even more. 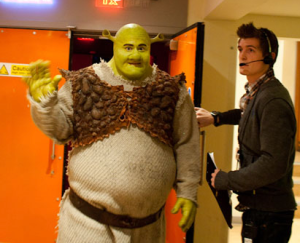 The adult humour bursting from the musical will have all the grown-ups chuckling, while the kiddies will love the colour, the glitter, being reunited with their favourite nursery rhyme characters and a fantastic storyline accompanied by clap-along music.

There’s something for everyone in Shrek The Musical – and this is what makes it so wonderful.

Actor Nigel Lindsay (Barry in Four Lions, Waking The Dead) has to spend over an hour and a half in make up to perfect his gruff look as the moody Scottish ogre Shrek. He towers above the other characters in a massive padded outfit, and is a huggable, spitting image of the movie favourite, accent and all.

The most spectacular and entertaining performance, however, is put on by former Eastender heart-throb, Nigel Harman, who takes the role of the midget Prince, Lord Farquaard.

He acts the entire production on his knees – how he musters the energy to see it through is mind-boggling.

Not once does he illustrate any exhaustion– merrily singing, pulling out funky dance moves, entertaining the audience to full effect and using his body so well that the audience would probably not be able to distinguish him from an actual real life midget. His wit and humorous scripting keeps the audience giggling throughout, and he really seems like he’s enjoying his part.

Amanda Holden plays Princess Fiona. She doesn’t make a major appearance until the second half of the West End Show. She’s likeable, and as the show goes on, you see more of the Britain’s Got Talent judge’s personal character unveiled as she smiles and breaks out some dance moves alongside Shrek as the pair near their happy ending.

Her presence in the musical is great, and the audience definitely appreciate it, however, her acting isn’t anything special enough to shout about. 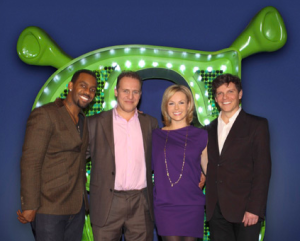 The musical is based on the Oscar-winning first Shrek film, as evil Lord Farquaad exiles fairy tale characters from his city and they all end up on the doorstep of loner ogre Shrek. In a bid to free his swamp of the fairy tale folk, including Humpty Dumpty, The Three Bears, and Pinocchio, the ogre is forced to face the world with his unlikely sidekick, Donkey, played by comic Richard Blackwood. Along the way, in classic fairy tale fashion, Shrek falls in love with Princess Fiona.

As well as the films, the production has been partly based on the first incarnation of Shrek, which, believe it or not, started out as a book written by cartoonist William Steig in 1990.

As a result, we get a much more in-depth look at the characters and their lives; we learn why Shrek is so grouchy, what Princess Fiona was doing in a tower all her life and about Lord Farquaad’s background.

This musical should not to be missed!

Meet the cast of Shrek The Musical in this video: