“You must go before things change” – that’s what everybody says about the Caribbean island of Cuba. At first I was puzzled at this comment, but I understood it better once I landed on Cuban soil…

The few things I knew about Cuba before I went

•Cuba has an eventful history. From 1492 to 1898, it was a colony of Spain. The rule was brutal, as the native Taino people and the forest were annihilated to clear space for large cattle and sugar farms belonging to a few wealthy owners and worked by slaves. In 1895, the poet, journalist and man who is dubbed ‘the father of Cuba’, Jose Marti, led an uprising against Spain. Although he was killed soon after, the uprising continued. In 1898, the United States entered into the Spanish-American war and Spain was easily defeated, so Cuba was under US military rule from 1898 to 1902, and during this time US individuals and businesses took over much of the land. Wealth belonged to them and the majority of Cubans lived in poverty, without land, proper incomes or sufficient food. On December 31, 1958, the Batista government was overthrown by Fidel Castro, and a socialist government took power. US property was reposessed by Cuba and the US then put up a trade embargo against the country.

•The Cuban government is headed up by the Castros. Raul Castro took over from his brother, Fidel as leader of Cuba in 2008, and while most resources are controlled by the state, Raul is slowly relaxing the rules and attempting to reform the economy. People wonder what will happen once the Castro brothers cease to exist.

•The US detention centre Guantanamo Bay is in Cuba. It’s at the south eastern tip of the island, but there is little other connection between the US and Cuba: the US cut ties with Cuba over 50 years ago.

•Everybody seems to come home from Cuba with cigars and rum.

•You should request a rum slushy at the bar if you’re staying in one of Cuba’s many beach resorts, I was told.

What I learnt and observed whilst in Cuba

•When you’re from the West, entering Cuba is like entering a time warp. Everybody rides in old cars from the 1950s and many buildings are crumbly and old.

•Guantanamo Bay is the only US ‘thing’ going on in Cuba – diplomatic relations are non existent.

•A US embargo that has been in force since the 1960s means that Cuba cannot trade or invest with America, although farm products and medical supplies are allowed. In 1920 though, Cuba was a playground for Americans who owned much of the land.

•There are no American brands in Cuba – so no Mc Donald’s, Starbucks, or clothing chains. There are also very few fast-food joints.

•Cubans aren’t fans of Americans. One hotel worker suggested that the best way for an American visitor to remain inconspicuous in Cuba was to say he or she were Canadian. 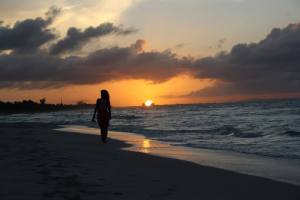 •Cubans are not allowed to leave the country without special permission from the government.

•Contrary to popular belief, Americans can enter Cuba, although there’s a bit of bureaucracy involved.

•There are no billboards or advertising posters anywhere in Cuba. As you’re driving along the freeway, you won’t see anything advertised. The only boards you’ll see are those put up by the government, which are propaganda notices and murals of revolutionary Che Guevara, who played a key part in the Cuban Revolution (when Fidel Castro’s army overthrew American-friendly President Fulgencio Batista from power).

•Hitch-hiking is legal, and everybody does it. It’s encouraged. People in state-owned vehicles are obliged to stop and offer rides to passengers if they have space for them.

•The average Cuban earns 5CUC a week – that’s about 58p in GBP. A chef at our hotel said he works 13-hour days for this wage. A 2000 Lexington Institute study found that it would take an average Cuban on a government salary about four days to earn enough to buy one pound of pork, rice, beans, and two pounds of tomatoes, three limes and a head of garlic.

•You’ll rarely find beef on the menu in Cuba. One of our taxi drivers said it was because it’s too expensive, as the government takes cattle away from farmers to be killed, and the farmers have to buy the meat back from the state – farmers aren’t allowed to kill the cattle themselves.

•Cubans know how to dance and do salsa. They’ll put you to shame in no time!

•All Cubans receive free education so the population is highly literate. Healthcare is also free.

•Cuban families are given ration cards which they can use to buy essentials such as rice, chicken, eggs, oil and pasta at a subsidised rate.

•Cubans weren’t allowed to own cars or businesses till recently – they were strictly state-owned till after 2008 when Raul Castro came to power.

•American author and journalist Ernest Hemingway was one of a few Americans who went to Cuba and chose to stay after relations between Cuba and America soured. He spent about 20 years in Cuba, just outside of Havana. His favourite watering holes, La Floridita and La Bodeguita del Medio, still stand today.

•In one of the restaurants I visited in Havana, the idea of vegetarianism was interpreted literally – I asked for a vegetarian pizza and the toppings consisted of carrots, potatoes, beetroot and basically any vegetable the chefs could find in the kitchen!

•A traditional night in for Cubans involves men playing dominoes, smoking cigars and sipping rum while the ladies chat and make food, our tour guide informed us.

•The island generally still runs on dial-up internet – there’s little or no chance of getting Wi-Fi out there.

•You’ve got to pay a tourist tax when you leave the country through the airport. It’s 25CUC, so about £15.

•Cuba’s sandy beaches are stunning and the water is very clear, but the mosquitos are a pain.

•Visit the Partagas cigar factory in Havana – even if you don’t smoke or like cigars, it’s worth a visit: a truly surreal experience. The majority of the cigar making process involves manual labour; first you see the women-only room where they sort the leaves, then the rolling, then the finishing. The deep smell of cigars engulfs you as you walk around, and the smoke from employees (staff are allowed to smoke while working and each receives a handful to smoke each day). You’re not allowed to take a camera or any such device into the building so you won’t be able to capture it, unfortunately. It’s one of those once-in-a-lifetime experiences.

•For music and dancing: Calle 62 (authentic Cuban music and salsa) and The Beatles (rock ‘n’ roll) bars in Varadero. At the former, locals will show you how to get your hips going and have you up from your seat to dance; in the latter you can rock out to famous songs in an outdoor bar area.

•Sip on fresh sugar cane juice. Sugar used to be one of Cuba’s biggest exports until the collapse of the Soviet Union. We had to travel all the way out to Guama for a taste of the sugarcane.

2 thoughts on “Playing the tourist in Cuba”