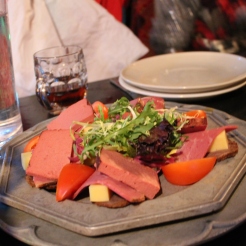 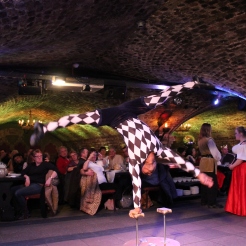 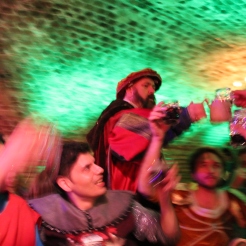 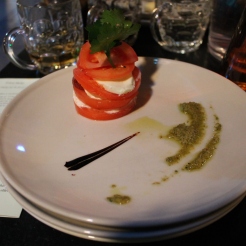 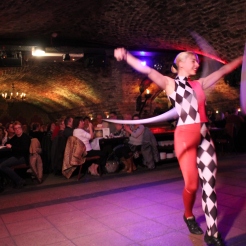 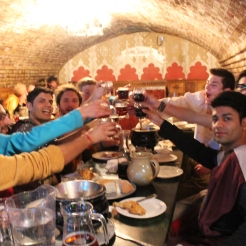 I’ve never heard the word “Wench” screamed out loud as much as I did last night.

I’ve also never witnessed so many people banging tables with their fists before – but at the theatrical, immersive dinner experience that is The Medieval Banquet, both are encouraged; this is part and parcel of the entertainment.

“Wench” is the medieval term for ‘waitress’, and as table service is the order of the evening, you’re encouraged to shout for your wench when you want something, and bang the table (instead of clapping) to express your delight. It’s all a bit raucous, noisy and mad – and young men seem to get a lot of satisfaction from the excuse to shout the word “Wench” at the top of their lungs.

Upon entering the low-ceilinged underground hall where The Medieval Banquet takes place, you’re shown to one of the long tables lining the alcoves, and given the chance to hire a medieval costume so you really fit in. Staff, who are authentically dressed, greet you in old English, and there’s the opportunity to have your picture taken with a real-life King Henry VIII by his throne.

The night’s entertainment kicks off once everybody is seated – medieval songs and sword fights are performed by actors, and performances from acrobats, contortionists, jugglers, singers are interspersed between courses. For the first half of the night, guests are mostly seated, but after the third course you’re encouraged to get up and have a little dance, before the entertainment ends and a mini disco takes place.

Ale and wine flows freely throughout the evening as it’s included in the cover price, and this makes for a very jovial atmosphere. There’s also a bar serving other alcohol that you must pay an additional charge for. It’s definitely not an event to bring children, and if you’re looking for a quiet, civilised night, this probably isn’t for you.

The experience would be best enjoyed in large groups (and there were plenty of stag dos, hens and birthday groups to prove it), although the communal seating arrangements do give the chance to mingle and make friends with those sitting beside you.

The four-course meal or “feast” was quite basic and a little disappointing – soup and bread was followed by a selection of cold meats and pate, and then mains were chicken legs and vegetables with apple pie and cream for dessert. The fact that the majority of the food was served in sharing plates encouraged conversation across the table but could mean that some people don’t get enough to eat.

The entertainment did, however, make up for the food, and the wonderful wenches really made a difference to the evening, encouraging us to bang, yell, play along and get involved with the experience as well as getting us up to dance.

We were lucky to be seated at the top of our table, closest to the central stage area, but I can imagine it being difficult to see the entertainment fully if you’re seated further down the table in the caves – so it may be worth trying to request seats closer to the stage if you are considering booking.

The olde-worlde setting, costumes, acting and entertainment combined nicely for an alternative night out in London, but it is debatable whether it’s worth the £50 fee.